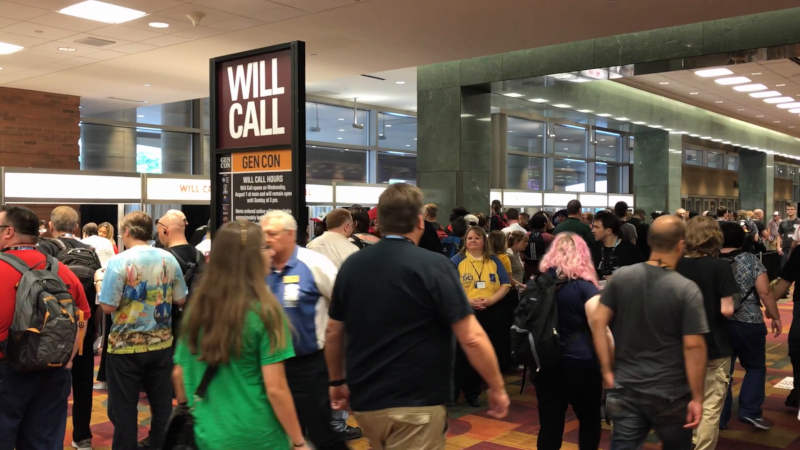 As I write this, Gen Con 2019 is 11 days away. Normally, I'd be getting excited about the show right about now. And I am, but this year feels different in a few ways, leading to a certain ambivalence as I look forward to my trip to Indianapolis.

Gen Con bills its self as the "best four days in gaming." If you heard that tagline, you would not be wrong to expect a decent amount of actual gaming. How much the show pays off that promise varies from year to year for me, however.

This year, I'm signed up to run two slots for Pelgrane Press -- "Swords Against Owlbears" for 13th Age, and "Takedown" for Swords of the Serpentine, both of which are sold out. I'm really looking forward to running these, as I love the folks at Pelgrane and both adventures promise to be a lot of fun. At the same time, my experience with either game is limited, and I worry until the second a session is over that I haven't done enough to prepare. Also, one session is at 8:00 AM Friday morning. What was I thinking?

Other than those two, I'm only scheduled to play one 2-hour game for the rest of the convention. I've got some tickets for seminars and other events, but as for actual gaming, that's it. Other years, I've run more sessions to fill my days. I'm just worried that I'll be wasting time wandering around.

Gen Con is usually a time when I can see a lot of the folks I know only through this series of tubes all together in person. Events like the Diana Jones Awards and the Ennie Awards include a good amount of hobnobbing, and you have the chance to get together with friends you only get to see once a year.

But this year, a lot of people I know aren't going to make it to the show. For many, the decision was financial, as people prioritize other things over what is a very expensive vacation. For others, life events have conspired to make the trip impossible. So, the crowd looks to be thinner as far as folks I normally enjoy seeing at the show.

On top of that, there's always the ugly patina of anxiety and imposter syndrome tinging my Gen Con experience. I guarantee there will be a time during the show when I am overwhelmed by feeling unnecessary or unwanted while in a crowd of other industry professionals. This year, I seem to be dwelling on the spectre of that feeling ahead of time. Maybe it will be better this year with so many of the people I really admire and respect absent, but I'm betting that will actually make it worse.

Finally, there's money. Did I mention that Gen Con is an expensive vacation? Between housing, food, and wanting to pick up the new hotness in the exhibit hall, the bill can rack up fast. (At least I save a bit on transportation, as Pittsburgh is just about at the edge of what I would want to drive comfortably.)

Money is a frequent source of worry in my life. This year, especially the last few months, have not been kind on that front. My day job has been forcing mandatory overtime on us for months, which means I get to spend even more time on my feet in a warehouse that only gets more unbearable as the summer heat waves move in. And recently, we learned that the extra work is an attempt to make the company look good to prospective buyers. My wife and I both work at the same place, so if someone buys it and decides to lay people off, we both could potentially lose our entire household income.

I usually look forward to picking up some cool stuff at the show. It's a way to stay connected to new developments in the field, and it's also just fun to come home with some new games to try. (Whether I actually get those games to the table in a timely manner is another story.) But this year, I'm going to have to reign in the budget considerably and leave behind a lot of things that I would otherwise easily grab.

With all that said, I am still looking forward to Gen Con. Last year, I put together daily video vignettes, and I want to try to do something like that again this year. It was a fun way to relax and reflect at the end of the day. I may even try to do some live broadcasts from the convention center, depending on what my service is like on the floor.

My group heads out Wednesday morning from Pittsburgh. It's about a 6-7 hour drive to Indianapolis, and thankfully, while not right near the convention center, we are still staying at a downtown hotel, so I don't have to worry about additional travel time after we check in. I'll be around Wednesday evening and throughout the rest of the show until we have to hit the road Sunday afternoon. If you're going to be there, get in touch with my on social media or email, and maybe we can say hello!