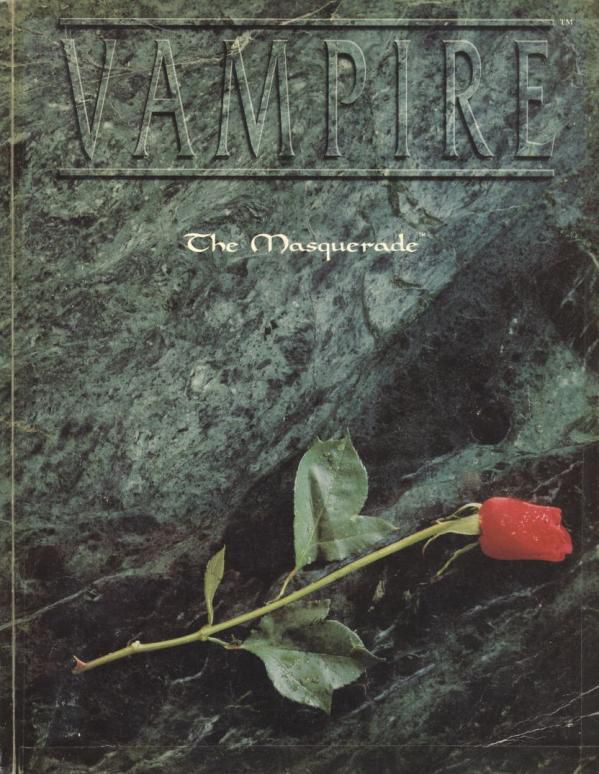 This chapter describes the various traits (Attributes, Abilities, Advantages, and so on) that define characters. The first rule here is on Specialties, bonuses to Attributes and Abilities that you can choose when your trait is over 3. VTM offers three options for how Specialties work—reroll 10s, cap the trait at three unless the Specialty applies, or reduce the difficulty of the roll by 1. In later games, this would standardize to the first option, but it's interesting to see the variations here.

The seven clans are described next. Each is a stereotype of what kind of monster you want to be: angry philosopher, bestial hunter, prophetic madman, hideous freak, distracted aesthete, duplicitous sorcerer, or corrupt aristocrat. Archetypes follow, to optionally define your Nature and Demeanor. Together, these decisions foreground your character concept before choosing numerical traits.

Attributes and Abilities follow, with each including sample Specialties and descriptions of what each level (in dots) means. This is your typical stat and skill selection, broken down into categories for the prioritization scheme used in character creation.

Disciplines are the mystical powers vampires wield by virtue of the power of their blood. These cover many of the tropes of vampire fiction: mesmerizing gazes, psychic senses, shapeshifting, and great resilience, strength, and speed. Thaumaturgy is a more complicated Discipline, a kind of ritual blood magic divided into paths. I've always questioned its inclusion in the game, since it becomes a confused grab bag of abilities later. Here, it simply provides a few interesting utility effects, plus the ability to manipulate fire, which vampires rightly fear.

Backgrounds are traits rated 1 to 5 like Attributes and Abilities, but they are rarely rolled. Instead, they define less tangible advantages like allies and contacts, mortals you can safely feed on, and wealth. The most important, however, is Generation, which directly rates how potent your character is. More points in this background let you store and use more blood, and eventually raise your traits to superhuman levels. I've rarely seen anyone make a character in Vampire that didn't have at least one level in Generation.

Virtues and Humanity form the morality and degeneration system of VTM. Virtues describe how you interact with the world, its dangers, and its temptations. Humanity is how far you've descended as a monster. The lower your Humanity, the more bestial you appear and the harder it is for you to interact with mortals and operate during the day. These systems go beyond simplistic alignment and show the influence of games like Call of Cthulhu.

Finally, Willpower and Blood Pool are resources that are spent and regained through play, granting bonuses and fueling exciting feats. Everyone has the same Health trait, but it too is described to round out the chapter.

This chapter opens with the experience system. Players are awarded 1-3 points each session, and 1-3 more points at the end of a story. These points are spent to gain new traits or raise existing ones on cost scale that increases with rating. The system encourages either hoarding points to increase the few areas you want to focus on or going broad and buying a lot of traits at low levels.

Backgrounds, Nature, and Demeanor are explicitly excluded from the experience point system. The game does talk about developing and changing them, but it's a strictly narrative process. This is an important recapitulation of the focus of this story-focused system.

The ebb and flow of Willpower and Blood Pool are discussed next. Willpower can be permanently raised through experience, but it can also be granted as a bonus to encourage players to engage with your story. It can also be lost when you botch a Willpower roll. Permanent Blood Pool, of course, is tied to the Generation background, which can only increase through narrative action.

Injury and Health are explored next, detailing the effects of injury and the process of healing followed by sources of injury other than combat (which comes in a later chapter). Frenzy is an extreme vampiric response to injury and other dangers like fire and sunlight. When a vampire succumbs to Frenzy, the beast within takes over. Rather than having the Storyteller take control of the character, though, the player is encouraged to run the character as a wild beast, aiming for total destruction.

Derangements and Humanity again produce a combined madness/morality subsystem. Derangements are psychological conditions that can result from Frenzy or other sources and force the player to roleplay in a certain way. This is very clearly drawn from Call of Cthulhu. Humanity, on the other hand, responds to the actions the character takes when in full control of themselves. Deliberate actions that show the character is forgetting basic human decency threaten to lower Humanity and make the vampire more and more bestial. It is a spiral mechanic and lies at the heart of VTM.

The chapter concludes with rules and advice for aspects of the vampiric condition. Golconda is a state of enlightenment where beast and man are reconciled and the vampire can fully control their urges. It is intended to be the culmination of a character's entire arc over the course of a campaign. Diablerie is the act of drinking another vampire dry, consuming their soul and with it their power. The power in a vampire's blood is addictive, and anyone (mortal or vampire) who drinks a vampire's blood three times is taken by the Blood Bond. And finally, there are rules for creating mortal servants empowered by blood (ghouls) or even new vampires through the Embrace.

Next time, we'll look at systems for drama, including fights, and then explore the setting: Gothic-Punk cities run by immortal conspiracies and threatened by upstart Anarchs and other threats.