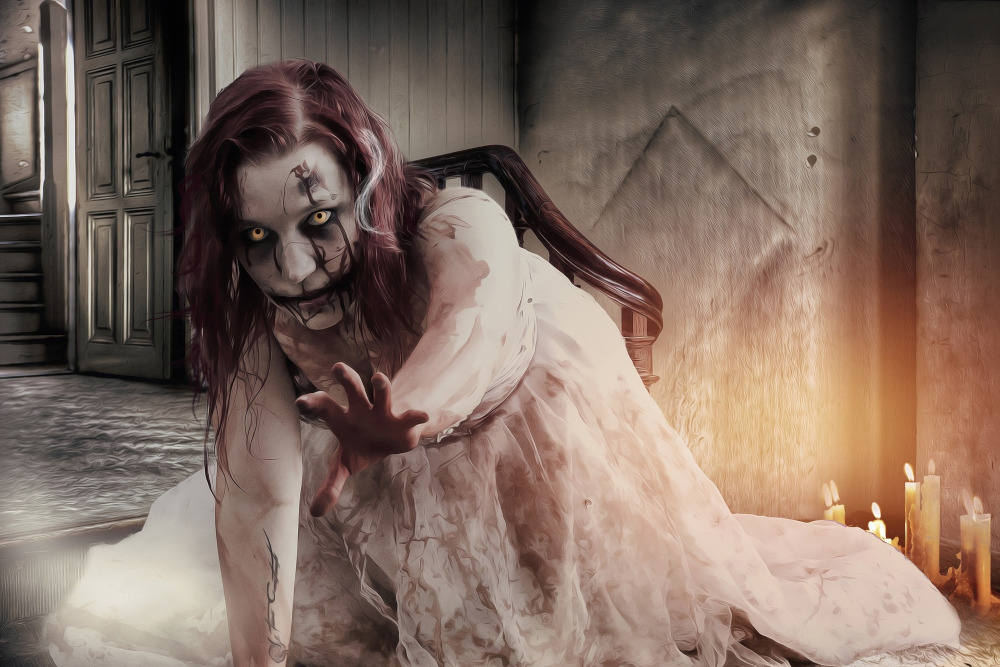 The survival horror scenario of ordinary people trying to escape a horde of shambling undead is very popular these days. You might be happy to know that GURPS Lite can handle it pretty well, with a few clarifications.

The first thing we need to establish is what kind of zombies to use. The classic, slow-moving eaters of flesh are the best in this case. Such a zombie might look like this:

Grapple (Skill 12): Anyone grappled by a zombie has -4 DX. To escape a zombie's grapple, you must win a Quick Contest of ST. Roll once no matter how many zombies are grappling you, but the zombies get +5 if more than one is grappling you.

Features: Zombies take half damage from firearms, unless the shot is to the brain (attack roll at -7, and brain has DR 2).

Zombies attack in mobs. Up to six zombies can attack someone at once. They will first try to grapple; once they've grappled, they will bite. To resolve a mob attack, make one attack roll. If five or six zombies are attacking the same target, add +1 to skill. Success means one zombie hits. For every two points by which the zombies beat their skill, another zombie hits. If the defender makes a successful Active Defense, they avoid one hit. For each point by which they beat their skill, they avoid another hit.

Example: Five zombies are trying to grapple Jamie, who has a Dodge of 8. The zombies attack with a group skill of 13. They roll a 9, which means three zombies potentially hit. Jamie rolls her dodge and gets a 7. She avoids two zombies, but the third manages to grab her.

Rather than worry about the nature of the zombie infection and characters possibly turning into undead, we will assume that some percentage of the world's population is just naturally immune. The characters are in this number. They can still be bitten and die, but they won't get back up again.

Since this is survival horror, we need rules for getting scared. Luckily, GURPS Lite has the Fright Checks on p. 24. (These are a very simplified version of the rules in Basic Set, but they are quick and easy enough for our purposes.)

If the characters are encountering zombies for the first time, they should make Fright Checks when they realize the nature of the undead and during their first few experiences fighting or fleeing. After a while, though, they will become inured to the horror of the walking dead.

You can bring Fright Checks back for truly gruesome things, like seeing a friend or loved one eaten. And the more terrifying something is, the greater the penalty to the characters' Will roll. Seeing your first zombie might be an unmodified Fright Check, while opening a door and seeing a room filled with dozens of zombies might call for a roll at -3.

Characters are ordinary folks, but to keep things interesting and a little more playable, you should start them at the high end of Average, or 50 points. At that level, you can have cops, ER nurses, or amateur athletes trying to survive the horde.

Characters should have high HT attributes. This will help sell the "survivors are immune" angle and will promote survivability. Advantages like Danger Sense, Fearlessness, and Hard to Kill are especially useful. Survivor characters may have disadvantages like Impulsiveness, Obsession ("save a loved one" is common), or even Phobias (which works in some ways like the normal Fright Check).

Important skills in this campaign include: Area Knowledge, Armoury (for fixing guns or building makeshift weapons), First Aid, Hiking (if the campaign will take you across great distances), Diplomacy or Fast-Talk (for the inevitable encounters with aggressive humans), Melee Weapons skills (because an axe doesn't need ammo), Guns (so you can shoot 'em in the head), Scrounging (to find useful stuff in the abandoned city), Stealth (to sneak past the horde), and Tactics (if you want to take on the horde).

GURPS Lite includes a number of modern firearms, but it leaves out a key feature, which is RoF (Rate of Fire). The guns include this stat, but the rules don't really explain how it works, especially for the shotgun.

For all guns except the shotgun, you can fire up to RoF shots with your attack roll. On a success, one bullet potentially hits. For every 2 points by which you beat your skill (or 3 points for a rifle), another bullet potentially hits. The defender defends, avoiding one bullet on a success and another bullet for every point by which they beat their skill. Roll damage individual for each bullet that actually hits.

Example: Jamie fires a shotgun at a zombie. She has Guns (Shotgun) skill at 13, and she fires both shots, making her skill 17. She rolls an 11, beating her skill by six and scoring seven potential hits. The zombie barely makes its Dodge, avoiding a single pellet. Jamie rolls 1d+1 six times, but since the shotgun does pi-, the damage is halved. And since the zombie resists bullets, the damage is halved again. So, the zombie takes only 7 damage when all is said and done (because each pellet does a minimum of 1 if it gets through DR). Next time, Jamie might aim for the head.

The obvious first choice for further reading is GURPS Zombies, followed by GURPS Horror. These serve as genre sourcebooks, teaching you how to build adventures and campaigns in the survival horror mode and many others.

GURPS High-Tech is loaded with gear for your survivors to scrounge up, including plenty of firearms and even vehicles. A lot of the rules for guns require the Basic Set to understand, however.